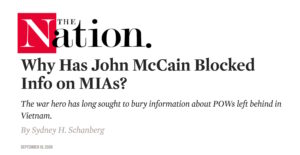 Read the article by the

“There’s evidence, evidence, evidence! McCain was adamant about shutting down anything to do with recovering POWs.  McCain is the classic opportunist–he’s always reaching for attention and glory. Other POWs won’t even sit at the same table with him.”

(On McCain’s Vietnamese propaganda radio broadcasts) He made those (broadcasts) – I know a POW who heard those broadcasts come into his cell, and said, “Oh my God, is that Admiral McCain’s son? Is that Johnny telling us our principle targets are schools, orphanages, hospitals, temples, churches.” That was Jane Fonda’s line. Where are those (broadcasts)? Believe me, they’re in the archives of the museum; the bragging, phony museum in Hanoi. McCain could not have wanted those to turn up in the middle of a Presidential race. He knows that, I know that and a few other people know that and that’s why he went against Bob Dole’s legislation.

“We do know that when (McCain) was there (POW camp) he cooperated with Communist news services in giving interviews that were not flattering to the United States.

Bob Dole wouldn’t let McCain be the chairman of the Senate Select Committee on POW/MIA Affairs because he knew McCain would just sweep everything under the carpet.”

Within five or seven days after being captured McCain made a deal to trade medical care in exchange for highly classified military information including specific details of the package routes for bombing North Vietnam. He also told them the primary bombing targets. We lost 60% more aircraft and men because of the information McCain gave to the North Vietnamese. After about a month things had gotten so bad that we called off bombing North Vietnam.

“Even POWs we knew who wanted to see their own debriefings were not permitted to because of the McCain regulation. The bill (The Truth Bill which would punish politicians and bureaucrats for impeding investigations on POW/MIAs) passed unanimously in the House and in the Senate only one Senator got in the way of opposing it. That Senator was John McCain.” (through McCain’s crafty manipulation, the bill was not passed.)

“I’ve witnessed a lot of his temper and outbursts,” Smith said. “For me, some of this stuff is relevant. It raises questions about stability. . . . It’s more than just temper. It’s this need of his to show you that he’s above you — a sneering, condescending attitude. It’s hurt his relationships in Congress. . . . I’ve seen it up-close.”